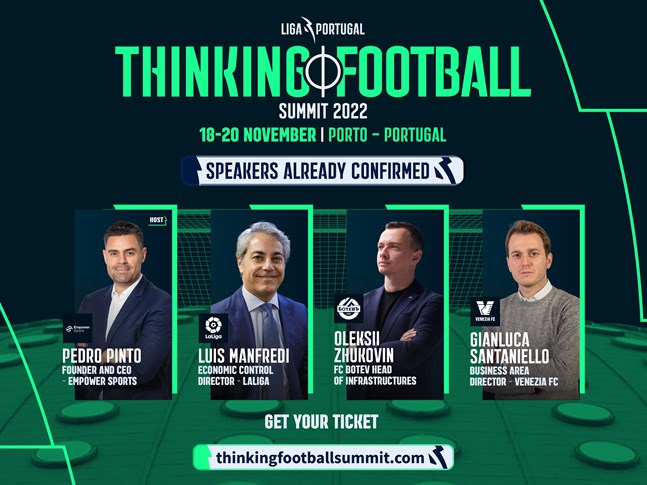 Pedro Pinto, Luis Manfredi, Oleksii Zhukovin and Gianluca Santaniello will be present at the Super Bock Arena - Pavilhão Rosa Mota, between the 18th and 20th of November

The Grand Professional Football Fair proceeds with the announcement of new additions to the event. This week, we have four high-profile new additions, internationally renowned for their success in the industry over the course of their careers.

The only Portuguese in this new group of speakers is Pedro Pinto. With over 20 years of international experience in media and sport, he is directly connected to world football's most influential journalists and stakeholders.

The Lisbon native spent more than a decade at the service of CNN International and, between 2014 and 2018, was in charge of UEFA's Communication department. In addition, he's globally recognised as the designated Host for FIFA and UEFA's draws and award ceremonies.

As expected, at the Thinking Football Summit 2022, besides being a speaker, he will also be the Host of the event, putting into practice all the skills he has acquired in this role over the years.

From LaLiga, comes Luis Manfredi, the Spanish organisation's Economic Control Director. With more than 10 years in the football world, the current head of economic-financial control of the clubs that comprise Professional Football in Spain also had previously worked for Hercules de Alicante, where he was Financial Director.

In LaLiga, he has held the positions of Head of Internal Coordination and Senior Analyst in the Economic Control Department, which he now runs.

One of the most respected young professionals in European football and current Commercial Director of Venezia FC, Gianluca Santaniello, is another confirmed speaker at the Thinking Football Summit 2022.

Holding a degree in management, he was linked to a career in consultancy for seven years before joining the Italian club in 2021, where he has also held roles as CEO and Head of Office.

Last but not least, we have Oleksii Zhukovin, the Ukrainian manager who has been in charge of several elite arenas in Eastern Europe.

He has already been in charge of stadiums such as Arena Lviv, Krasnodar Stadium, Krestovsky Stadium and is currently leading the project of the new venue of the Bulgarian club FC Botev.

We remind you that tickets for the three days of this event are already on sale HERE! So don't waste any more time and book your place at the grand Professional Football fair now. In addition, subscribe to the event's newsletter and stay up to date with all the news!