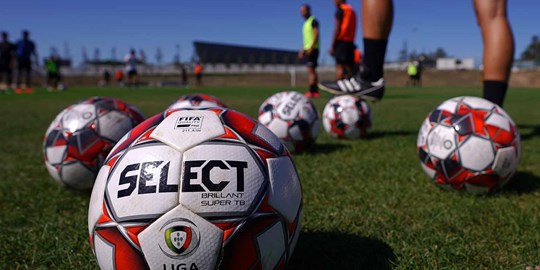 (a) clubs finishing level in the table will have their results against each other compared;

(b) goal difference and number of goals scored within the results against each other;

(c) the team with the most goals scored away from home in the head-to-head matches;

(d) goal difference and number of goals scored and conceded throughout every match of the competition;

(e) highest number of wins in the competition;

(f) highest number of goals scored in the competition.

(a) when there are only two clubs leveled in the table:

i. a playoff will be arranged, at a neutral ground, determined by Liga Portugal;

ii. if the match ends in a draw within regulation time, the game may go into extra time, which consists of two periods of 15 minutes each;

iii. if the score is still level, the winner will be determined through the penalty kicks system, in accordance with the procedure specified in the Laws of the Game.

(b) when there are more than two clubs leveled in the table;

i. a single round competition will be held, at a neutral ground, in order to determine the winner;

ii. if at the end of this competition the winner is not determined, and two or more teams remain level, the tiebreaking method should be in accordance with the criteria set out in Article no. 1.